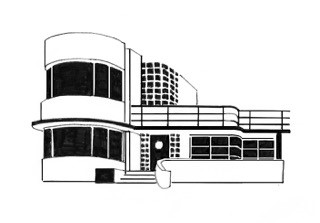 The inter-war functionalist style, which spanned the period between the two world wars, had its background in European modernism of the 1920s and 1930s. Modernism is the general name given to the trend which embraced functionalism, technology and the elimination of applied historical ornamentation. The influence of Le Corbusier, Eric Mendelssohn, W M Dudock and the Bauhaus was important. Using industrial products and machine-made components, the design was minimalist. The buildings were simple geometric shapes with walls often cement rendered and painted white or built in smooth cream or biscuit coloured brickwork.  Windows were generally steel framed, some with curved glass or combined with glass bricks.

Australia was slow to embrace these ideas, with the better inter-war examples being by younger architects who had travelled to Europe and witnessed the new International Style first hand. They designed streamlined, horizontal architecture, often in factories, schools and hospitals.

The Streamline Moderne style was a late branch of the Art Deco style. The style emphasised curving forms, long horizontal lines, and sometimes nautical elements, such as ship railing balustrades and porthole windows. Features reminiscent of marine forms led to the adoption of the name ‘P &O’ style or ‘Ocean Liner’style

The interiors of Functionalist Moderne houses often incorporated Art Deco motifs and designs and designs in cornices, handrails, fireplaces lights and hardware.  Bathrooms and kitchens were said to have a futuristic look as every available form of labour saving convenience was introduced to create ‘a machine for living’.

Streamlined Moderne style home located at The Boulevarde in Cammeray