Conservation areas are areas in which their history and elements such as pattern of subdivision, building style and siting, landscaping and streetscape create a cohesive sense of place that is worth protecting.  Within conservation areas there is a focus on the protection of the external envelope of buildings, gardens, and structures.

Conservation areas generally recognise that many buildings have significant heritage value and are expected to be retained, while other buildings are not expected to be retained as they may be of little heritage value.  An interesting dilemma arises when you have the only unattractive house in a conservation area.  Even if you are given permission to demolish.  How are you restricted when it comes to a new build?

We refer to an interesting article by Trisha Croaker in the Sydney Morning Herald entitled ‘A uniquely modern twist on the old to get the all clear’ (November 24 2013) which deals with this exact scenario.  The initial house, described as the “classic ugliest home in the street”, was a 120-year-old 2 bedroom ”rundown weatherboard, asbestos and bricked-over mess”.  The building had no heritage value but was located within a conservation area in the Sydney suburb of Rozelle. 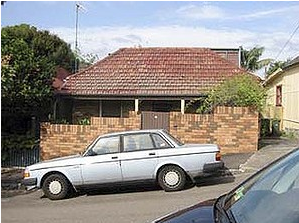 The owners apparently had a tight budget, and the site was only 195 square metres.  In order to get approval for a new build the owner was required to work closely with council to broker a solution for any new design.

According to Croaker the dilemma arose when the council struggled to express exactly what it would approve.

“The council was unclear what building forms it did and did not want, with policies swaying with staff changes. Their directions ranged from: a new house that looked obviously new, to a house that was new but sympathetic, to a house in which ”everything must stay the same”.”

In the end the architects, Oxide Design, decided to present the Council with a booklet that interpreted all building styles deemed appropriate for the area and possible ways these could be ”morphed” to create modern, sympathetic homes.  Rohan Little of Oxide Designs explains that ”from a design point of view, this is the antithesis of what we’re taught”.  Little further explains ”we created the exterior to get approval for that, and then had to fit the interiors.”  But it meant the council was then able to grant an ‘Approval’.  The final design approved is a sympathetic, 148-square-metre modern weatherboard and glass house that has been described as “traditional, yet somehow, interestingly not traditional.” 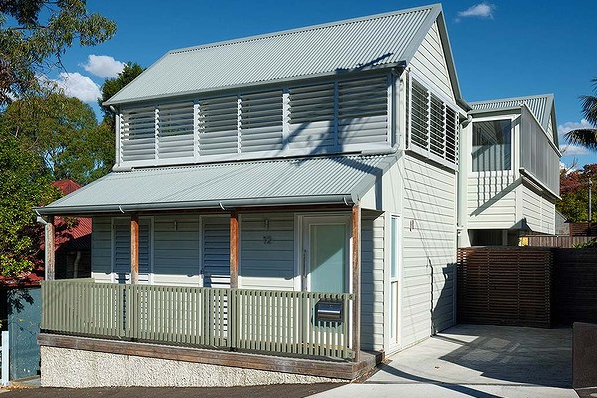 The new house has a smaller floor space but three bedrooms, two bathrooms, two living areas, a study and pool over two levels, with a light sense of flow and circulation.

Entry is via a traditional-looking verandah. 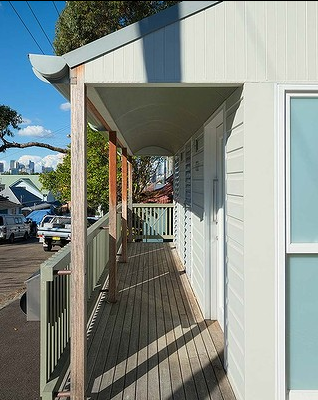 Inside, what appears to be a corridor has views out to the pool. Each so-called ‘corridor’’ doubles as something else: either a study area, walk-in wardrobe for the main bedroom, or bathroom. Spaces flow around a central void which draws in the northern light and increases the sense of volume. 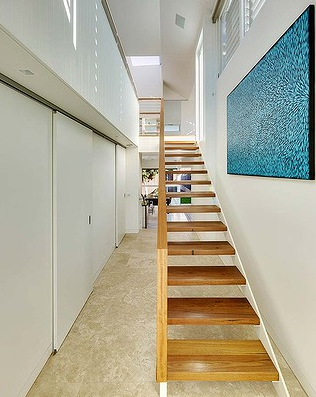 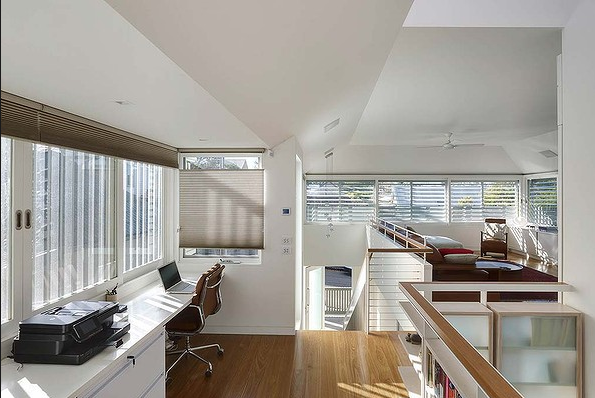 It is very much a modern house inspired by a traditional design.  Importantly it doesn’t look like a reproduction.  As Little says ”We’ve learnt that when you’re designing in a conservation area, there are ways of morphing new designs and creating modern homes into the locality without completely reinventing the language.”

Photos are by Michael Nicholson.