The Kolumba museum in Germany houses the Roman Catholic Archdiocese’s collection of art which spans more than a thousand years. The collection includes paintings, drawings, prints, sculptures, decorative art and religious icons from late antiquity to the present. Apart from a few works on permanent display, the presentation features a regularly changing selection of the museum’s holdings. The items are generally displayed without accompanying text, and in no particular chronological or stylistic order. While the collection is well worth seeing the absolute beauty of the place is considered to be the building itself. 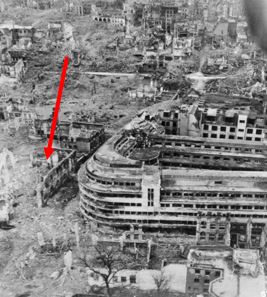 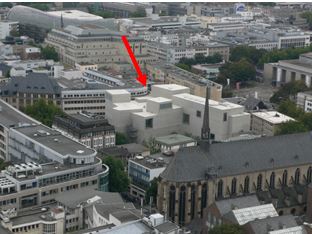 The Swiss architect, Peter Zumthor, built the art museum around the ruins of the parish church of St Kolumba, located in Cologne, a city that was almost completely destroyed by bombing in World War 2.  The church dedicated to St. Kolumba, located relatively close to the magnificent Cologne Cathedral, was once the most important church of the diocese.

Interpretation in the new museum is minimal.  None of the works carry any information; instead a small brochure is handed out with plans of the exhibition rooms that help the observer to identify the individual works. Zumthor argues that the absence of plaques enhances the aesthetic value of the exhibits.

Apparently the museum is a bit tricky to find but is only a 15 min walk or so from the Cologne Cathedral. The church is free to enter. Click here to visit the museum’s website.

History of the Build

The only part of the church that remained after the bombing was an old Gothic image of the Virgin placed on a pillar. The icon, which survived intact, is called “The Madonna of the ruins” and was considered, by many, to be the symbol of hope during the painful years of post-war reconstruction.  In the 1950s the ruins were transformed into a memorial garden and Gottfried Bohm built a small chapel on the site to house the statue of the Virgin. While it was well-liked the chapel was not considered one of Bohm’s most memorable works, lacking the amazing expressionist invention of his 60s buildings, like Neviges Pilgrimage Church. In 1973, Roman, medieval and Gothic ruins were discovered under the old church further increasing its historical value. A collection of temporary roof structures were installed to protect the delicate archaeological remains.  The excavations required the removal of the memorial garden. 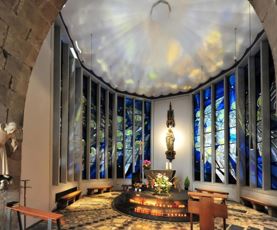 In 1997, with the ruins becoming increasingly surrounded by commercial development, Cardinal Meisner commisioned a competition to build a museum to display the religious art collection, at the same time accommodating the ruins of St Kolumba.  Zumthor won the competition and the project was realised ten years later.

Zumthor’s proposal was both ambitious and minimalist.  The towering new structure both incorporates and shelters the ruins.  The building completely surrounds the ruins of the church and merges with them while the upper level and side-wing house the exhibit areas.

The new structure is fused to the walls of the ruined church that it protects.  The light grey brick was developed for the project and provides a contrast in colour and texture to the ruin, and a level of simplicity.  The bricks are modern in style and unusually long and thin, they are all some 36mm thick but vary greatly in length up to 520mm.  This unusual brick size was suggested in order to adapt the new structure more easily to the fragmented existing structure of old Gothic Church. Specially made in Denmark, they were burnt in charcoal kilns to produce gentle variations of honey-coloured pale grey. The mortar course is unusually thick, exactly half the size of a brick and the mortar is nearly the same colour as the bricks. 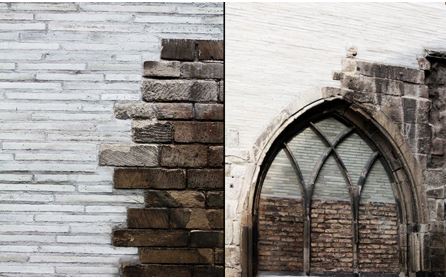 The weight of the new masonry is relieved by small perforations that also admit a dappled light into the cavernous interior where the remains of the old church lie. 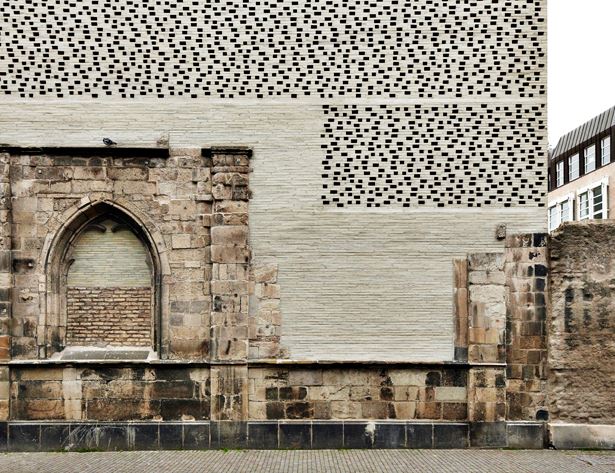 Many feel it is the interior of the building where Zumthor’s work can truly be appreciated. The architect has wrapped both the octagonal chapel as well as the roman ruins with a double height nave supported by thin metal columns. The visitor is able to walk throughout the chapel by means of a winding passage which lies over the ruins. 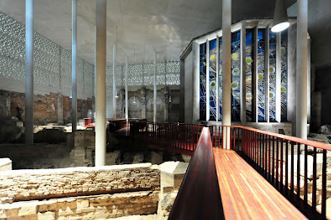 Besides the chapel, the building includes 16 exhibition rooms arranged on three levels, including the area on top of the church.  The exhibition area is dotted with large windows which frame superb views of the cityscape, views also reflected in the polished white floors. 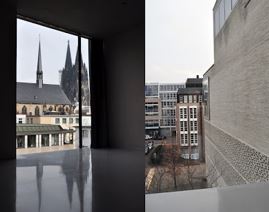 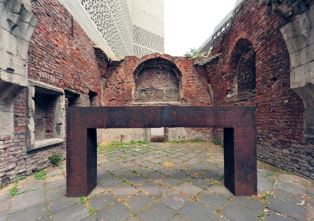 Kolumba, which cost around 43.4 million euros to build, has 1,750 square metres of exhibition space and 17 rooms and while its cultural importance is well-recognised it is one of Cologne’s smaller museums. Zumthor received the DAM Award for Architecture in Germany 2008 for Kolumba and in 2009 he was awarded the most important prize for architecture, the Pritzker Prize, in recognition of his life’s work.

While Zumthor’s approach of building on the ruins was considered an obvious response given the issue of space, the strategy was always going to be fraught with problems.  Many people objected to the chapel being built over. The ruins were to be disturbed as little as possible, so a lot of research was required to determine where supports could be located.  To preserve the excavated remains, they had to be kept at outdoor temperature and humidity while the works in the collections had to be kept within very strict curatorial limits. So great was the pressure for space that fragments of Gothic walls had to be incorporated into the perimeter, causing complicated structural issues. As with most of Zumthor’s buildings, the exterior reveals little. At ground level, it is pierced only twice, there is the glazed entrance to the foyer of the main building and the separate opening for the chapel.

While it can be argued that Zumthor’s response is an extreme one, he has allowed the story of the building to continue.  In addition to the church ruins dating from around 1500 and the chapel of the “Madonna in the Ruins” built in the 1950s, architects have unearthed layers from the Late Medieval, Caroligian, Frankian and Roman periods. Zumthor has now added a contemporary layer.

The materials and finishes that the architect has selected gives the building a fairly understated minimalist feel, despite its bulk. The new respects the old with a clear delineation between the two.  Zumthor has used light to soften the impact of this dramatic intervention.  It can be argued that the building works more successfully from the inside, with this interaction of light and shadow, that it does externally.

The museum in its present form is said to have an introspective, meditative and calm atmosphere. As Jan Thorn-Prikker, former member of the Online-Redaktion team of Goethe-Institu, has concluded:

“There is no brash modernism here. The building submits completely to the art it serves to display, but despite its inherent humility continues to assert its character as an architectural masterpiece. Asceticism and sensual design enter into a unique relationship, due certainly also to the architect’s minute attention to detail and an obvious delight in skilled craftsmanship. Narrow stairways, polished terrazzo floors, the reading room furniture designed by Zumthor himself, a consistent lighting system and the invisibility of pipes, vents and cables are signs of a designer obsessed with perfection. Nothing appears transient or arbitrary.”

As Zumthor has said himself, “The new has to motivate us to better see the existing’, the new building serves the old as its historical reference, and operates its own function of exhibition – displaying the continuous history and culture.