Visit the Bauhaus School in Dessau, Germany, which now operates as a museum. Tour the campus, and spend the night in one of the 28 1920s-style dorm rooms that housed some of the Bauhaus greats during their student and junior professor days. 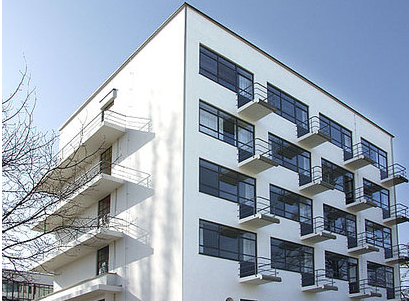 The Bauhaus was founded by Walter Gropius in 1919 in Weimar, transferred in 1925 to Dessau and then to Berlin in 1932.  It closed in 1933 when its leading teachers left for the United States to escape the Nazi regime. The school taught design, building and craftsmanship.  The Bauhaus concept (based in part on the De Stijl movement of the Netherlands) was to teach that all arts had their roots in handicrafts thus removing any distinction between fine arts and applied arts or design. Students were taught the value of an interdisciplinary tutelage, at the time a radical idea, but now the basis for any education in the Arts.

In 1927 Gropius appointed Hannes Meyer as head of the architecture department. He held the position for only two years but in that time managed to change the focus of the school from multi-disciplinary to architecture and industrial design. He was succeeded by the architect and designer, Ludwig Mies van der Rohe,  who was the school’s director for its last three years.

The Bauhaus firmly established industrial design. It stripped away the decoration, and left clean lines of function. To some this represents the removal of all that is human in the crafts. Bauhaus style became one of the most influential currents in Modernist architecture and modern design. The teaching of the Bauhaus spread world-wide as did the influence of its teachers, above all Mies van de Rohe. 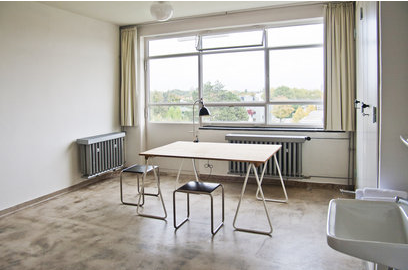 Today, the studio flats are let to visitors. One of the newly opened dorm rooms retains all of its original objects and furniture; the others have been reconstructed using old photos and the designs of former inhabitants, including Marcel Breuer, Josef and Anni Albers, Franz Erlich, Marianne Brandt and Gertrud Arndt. 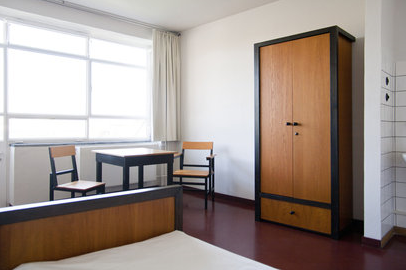 Note: this experience also means communal showers and restrooms in the hallway, just as it was back in Bauhaus days. Because the studio building is heritage listed, it is not possible to provide accessibility for wheelchair users and handicapped persons.

Contact Bauhaus Dessau to find out more about rates and availability.