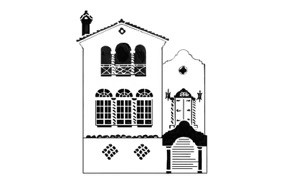 In the inter-war period a wide variety of eclectic styles started to emerge.  Travel in Italy and Spain was a common pursuit for many local architects, who saw the buildings of these Mediterranean regions as appropriate to the climate and light of Australian cities, and borrowed design elements for their buildings.

Leslie Wilkinson, the first Professor of Architecture at the University of Sydney, was a strong advocate for the adoption of the ‘Mediterranean’ style for Australian homes throughout the 1920s and 1930s and popularised the style particularly in the eastern suburbs of Sydney.

Like the Californian bungalow, the Spanish Mission style originated in Los Angeles. The style was a revival of the features of the 18th-century Spanish missions that were dotted around California. They incorporated elements from Spain and Mexico. In many cases, most of the Spanish Mission style was related to decorative details on the outside of the building. Internally, the houses weren’t that different from previous periods.  Their design began to become more open plan, sometimes using double glass doors from the lounge to the dining room or arched openings to link rooms. Fireplaces were built on a generous scale. The Spanish Mission Style was seen as an attractive option during the Depression for a “middle class” house, a cinema or even a service station.  It was also suited to apartment blocks, which were popular at the time.