This project involved a bold extension and restoration of a Victorian boom-style house in Melbourne’s Armidale. Initially the client was considering demolishing the historic building as it was in poor condition with severely cracked brickwork. The house was not heritage listed so this was a serious consideration, however the Architect Matt Gibson, felt this would be a shame given its “wonderful period details” and the surrounding streets cape.  Important features included large boom style architraves and four meter high ceilings.  Gibson sought assistance from RBA Architects to assess the state of the building and their conclusions supported his decision to retain the building. While restoring the front part of the house they elected to knock down the rear, an previous addition, replacing it with  a new extension or effectively a second house, clad entirely in glass and wood. 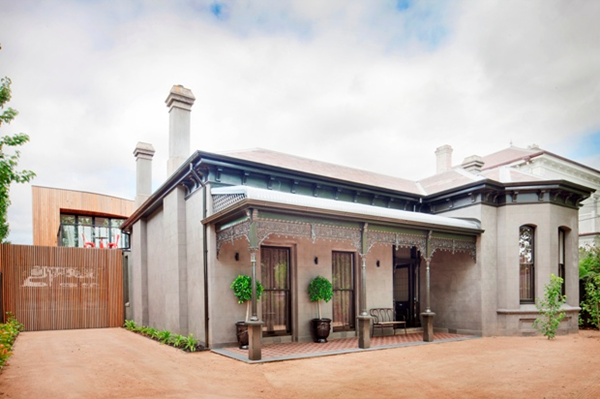 Restoration of the Victorian front included rendering the brickwork, re-flooring and re-roofing.  The front of the house was originally used as a living area with the bedrooms in the demolished rear extension.  This has now been reversed with the heritage section now hosting a large bedroom, en suite, guest rooms, drawing room and formal entrance way. 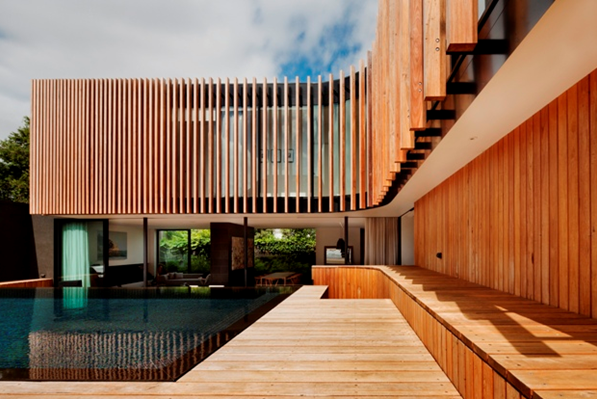 “Although the new works (clad in timber) are deliberately set apart as a new ‘pavilion’, they are also recessive from the street adding to the sense of cognitive interest once one reaches the end of the axis leaving little memory of the original Victorian dwelling.”

The link between new and old sections of the building was made via a garage and a circulation ‘bridge’ extending off the existing hallway. Gibson talks of how the “employment of radii / curved corners within the apexes of the stacked ‘L’s also help to enhance a more sculptured and playful point of difference to the rigidity and masculinity the existing masonry building.” He describes the new addition as a “Neutra-like Palm Springs modernism”. 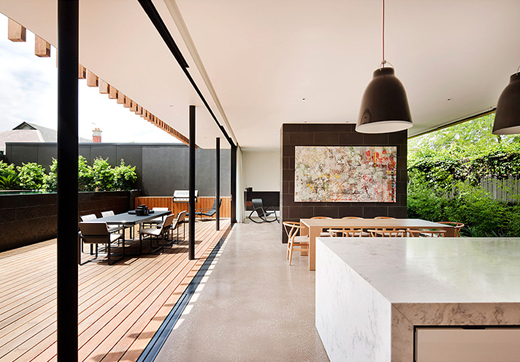 The two-storey L-shaped pavilion at the rear contains a kitchen, living area and laundry on the ground floor adjacent to the pool and three bedrooms and a children’s retreat upstairs.   A full set of glass doors opens to the pool and outdoor living. The timber cladding of the new structure contrasts against the old section which has been rendered dark grey. 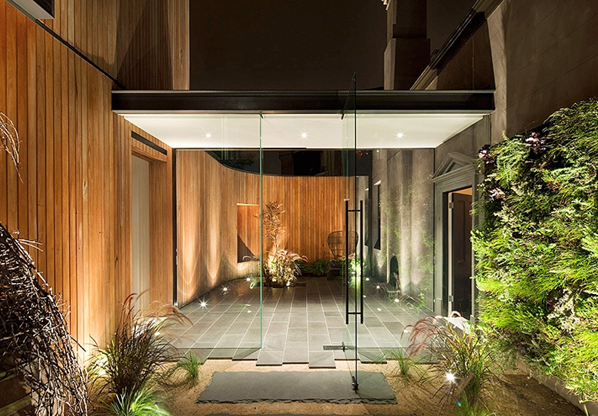 The new section is separated from the old by a glass-boxed prism.   The original central arched hall runs straight into the contemporary kitchen at the rear via the prism, framed either side by small courtyards. One side of the prism offers an alternate, less formal entrance to the house. The floors in the old section are Royal Oak, the prism are basalt while the rear section has polished concrete further emphasising this sense of being “separate but connected”. 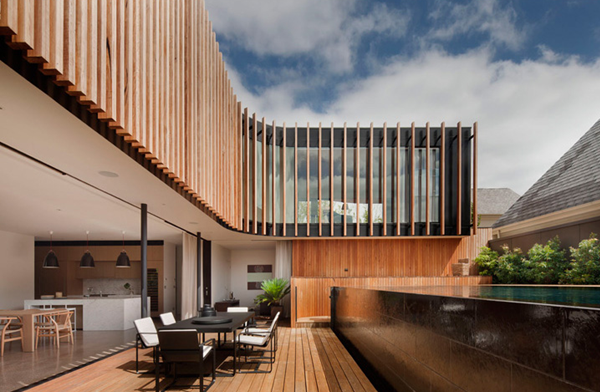 Blackbutt timber was used for the ‘fins’ that clad the upper level, making intelligent use of curved form to provide privacy for the rear living modules. As the radius extends back towards the bedrooms, the spacing of the fins becomes tighter, eventually forming a slatted, apparently solid mass mimicking the external living area below, which is dominated by a pool resting upon black butt wharf decking.

The fins also solve solar emission concerns as they disperse gradually from east to north.  Gibson chose to use low embodied energy materials to support the sustainable credentials of the build including recycled timbers and/or radial sawn timber materials locally grown from re-growth forests (silvertop ash) and re-salvaged blackbutt fins. There was also the recycling of materials from the existing extension including the brickwork and salvaged slate sourced from a local town hall.